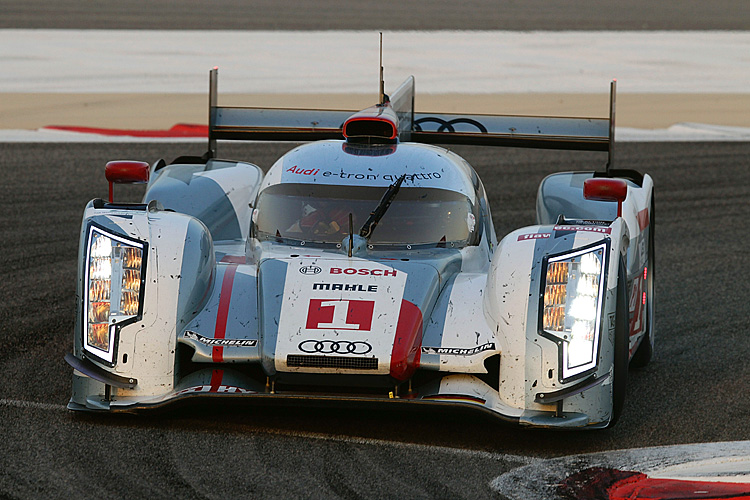 The #1 e-tron of André Lotterer, Benoit Tréluyer, and Marcel Fässler was both fast and reliable, which earned it the victory. (Audi Motorsports)

The Le Mans-winning #1 e-tron of André Lotterer, Benoit Tréluyer, and Marcel Fässler completed 191 laps of the Sakhir Endurance circuit, finishing a lap ahead of the #2 car of Allan McNish and Tom Kristensen.

The winning Audi survived six hours in the extreme heat with no problems. The #2 car had to stop three times for repairs and lost a lap

The two Audis were not the fastest cars on the track; once again that honor belonged to the #7 Toyota TS030 Hybrid. Toyota had electrical issues which cost it four laps and then crashed in the fifth hour, giving Audi the race.

“It’s great that we won the race. We made no mistakes. The pit stops were good too,” said Marcel Fässler in a press release. “The race went a bit in our direction because the Toyota, and unfortunately our team-mates too, had various problems.”

André Lotter agreed: “First and second place is a top result for Audi. Maybe our rivals took a higher risk as a result and in the end retired due to a mistake. A brilliant performance by the team and by my team-mates.”

Both Toyota and Audi tried double-stinting: Audi left André Lotterer in for two stints but lost time near the end of the second stint as Lotterer could barely concentrate. Toyota tried it, but called it off when tire degradation slowed the car too much.

Audi qualified 1–2 but the Toyota TS030 Hybrid was fastest in race trim, taking second place on the first lap and the race lead on lap seven. Audi’s issues started in the first fifteen minutes: first the #2 car lost a headlight, then a sticking rear break wore out the left rear tire, cutting the car’s grip.

These problems were fixed at the first scheduled pit stop, but the car lost a lap which it never made up. 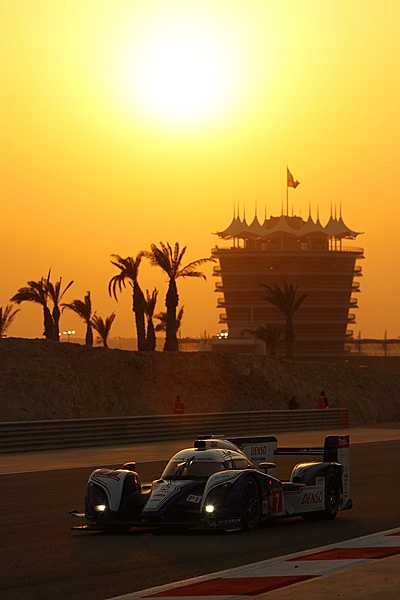 The #7 Toyota TS030 was the fastest car on the track but it retired 80 minutes from the finish. (Toyota Motorsports)

Alex Würz in the Toyota had an 18-second lead over the #1 Audi after two hours, 20 minutes when the Toyota had to pit with a malfunctioning lighted side number plate. Bahrain was a night race so cars were required to display lighted numbers so race officials could identify the competitors.

The Toyota crew lost four laps tearing down both side pods trying to fix the number-plate lights—a deficit the team could not hope to erase on pace alone. Toyota needed the Audis to crash or break.

Oddly half a dozen cars had headlight or number light problems—the #71 AF Corse Ferrari’s mechanics resorted to taping flashlights to the doors to light the numbers.

Toyota pushed hard to make up what time it could, to be ready if the Audis had further problems. Four hours, 40 minutes into the race, Nicolas Lapierre pushed a little too hard. The Toyota driver tried to squeeze inside the #21 Strakka Racing HPD ARX-03a in Turn 10.

Lapierre made his move much too late; Strakka driver Johnny Kane tried to leave room, but he had to get around the corner himself. Kane cut across the Toyota, sending it spinning into the gravel with terminal front suspension damage.

The two Audis just stayed out of trouble for the remaining eighty minutes and the Le Mans-winning #1 e-tron of André Lotterer, Benoit Tréluyer, and Marcel Fässler took the win, the third for the driver team and the fifth of the season for Audi.

The #1 Audi had no mechanical issues save one extended pit stop for a new nose after some minor contact; otherwise it ran perfectly, headlights and number lights glowing.

The win gave the three younger drivers a 13.5-point lead in the Drivers’ Championship over veterans Tom Kristensen and Allan McNish. Audi had long since clinched the manufacturer’s title, which Toyota never seriously contested.

Toyota’s retirement let Strakka Racing get a car on the podium; the #21 HPD ARX-03a of Nick Leventis, Danny Watts, and Jonny Kane survived its collision with the Toyota to finish six laps down in third.

Starworks Motorsports had hoped to clinch the LMP2 title at Bahrain; the team had a good chance as its chief rival, ADR Delta was plagued with mechanical troubles, starting with brake and suspension failure at the end of the first hour and ended up back in the garage a couple hours later.

The # 44 Starworks HPD ARX-O3 took the class lead just after halfway. The #49 Pecom Racing Oreca 03-Nissan, second in class, had to pit in the fifth hour to fix its malfunctioning side number lights, giving Starworks a two-lap lead.

The Starworks car made its last pit stop with 45 minutes to go, but the car wouldn’t restart; its alternator or starter was overheated. The car sat in the garage for four laps before it finally refired and rejoined in third place where it finished, 6.35 seconds behind the #23 Signatech Oreca-Nissan, two laps behind the Pecom car.

The WEC heads to the Far East for its final two events the Six Hours of Fuji in Japan on Oct. 14 and the Six Hours of Shanghai in China on Oct. 28. Tickets are available through fiawec.com.

Audi scored a 1–2 finish at the WEC Six Hours of Bahrain. (Audi Motorsports)