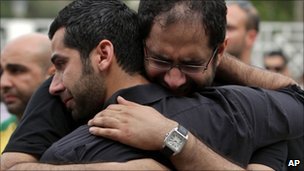 Two policemen have each been jailed for seven years by a court in Bahrain for beating to death a man amid a crackdown on anti-government protests.

Karim Fakhrawi, a Shia founder of al-Wasat newspaper, died in April 2011, a week after going to complain to police about plans to demolish his house.

Several police have been charged with, or are being investigated for, abuse of protesters and detainees.

At least 60 people have died in unrest which began in February 2011.

A number of police are among those who have been killed in clashes.

Demonstrators have been demanding more democracy and an end to what they say is discrimination against the majority Shia Muslim community by the Sunni royal family.

A spokesman from the main opposition movement, Wefaq, criticised the length of the sentences handed to the police as lenient.

Human rights groups and opposition supporters have accused the Gulf kingdom of failing to properly implement the recommendations of a 2011 report into the handling of anti-government protests.

The inquiry found excessive use of force by security forces, numerous human rights abuses including torture in detention, as well as the sacking of more than 4,000 employees, almost all were Shia.

King Hamad bin Isa Al Khalifa’s government denies it has been stalling on acting on the recommendations calling for extensive judicial, legislative and policing reforms.