Any track day, even one that has to do with LeMons editions, has its fair share of excitement. However, there are certain occasions on which motorized stars align and we get to enjoy a competition between machines we can only dream of seeing together.

The latest example of this comes from the video below, which takes us to a Bahrain track day. Sure, the name of the circuit hosting the high-octane event says it all, but it’s difficult to be prepares for a line-up such as the one we have here.

Many uber-hot track days have accustomed us to rejoice when seeing a GT3 RS battling ot out with a 458 Speciale, but the range of go-fast toys that takes part in the timed party we’re discussing is something else.

Perhaps the most extreme pair of machines present here is the one we mentioned in the title. We have to admit one doesn’t get so see a McLaren P1 GTR sharing the track with a Rauh-Welt Begriff Porsche too often.

As you can imagine, the aural side of such a horsepower fest is nothing short of memorable. For this reason, we see ourselves forced to ask you to turn up the volume before dipping into the entertainment potential of the clip.

What you’ll get to see in the video can be considered Bahrain’s version of the Goodwood Festival of Speed.

The menu also includes single-seaters, while civilian stuff, such as a Honda S2000, obviously go unnoticed.

The devil can be in the handling details, so don’t always trust the stopwatch

Manhandling one thousand horsepower and having the most fun on the track may just be two different sensations. As a result, the most interesting side of this sting is that we can’t be sure which driver got the biggest smile while lapping Bahrain. 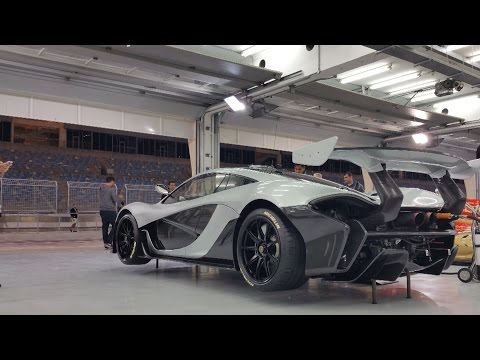