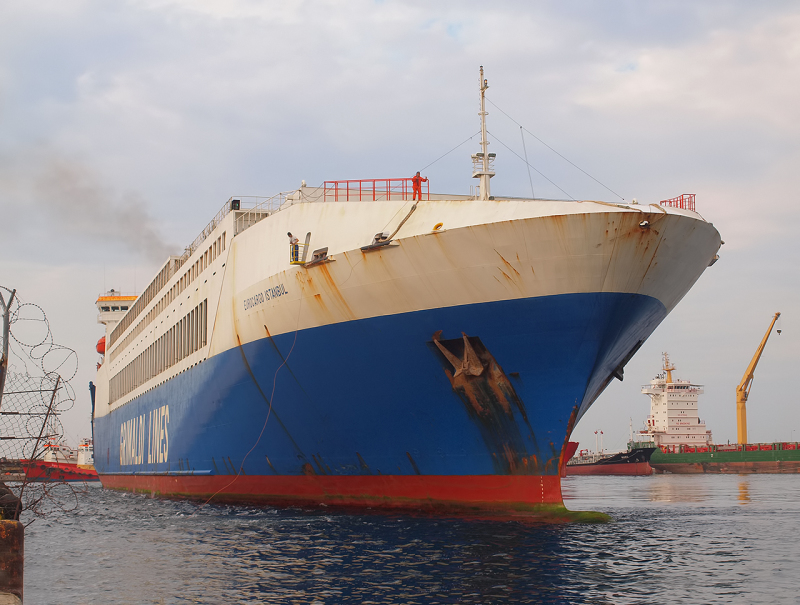 The passenger ferry Eurocargo Istanbul collided with the anchored general cargo ship BBC Bahrain at Livorno outer anchorage in Italy. The Ro-Ro passenger vessel got engine failure en route from from Cagliari to Livorno near the scene of collision and requested tug assistance for berthing at the port. The tug was dispatched, dut due to the bad weather and strong winds, the towing line broke and the ferry was adrifted by the currents, waves and winds to the anchored general cargo ship BBC Bahrain. The collision was not serious and the damages of the both vessels were not sufficient, but further estimates of the ships conditions will be made after weather improves.

The passenger ferry Eurocargo Istanbul was anchored also at Livorno outer anchorage and the passengers on board were transported to the shore with boats. The bad weather is hampering the entrance to the port, as may put the vessel in danger again. The local authorities will consider new salvage after weather improves. The investigation for the root cause of the collision is under way.

The general cargo ship BBC Bahrain (IMO: 9578751) has overall length of 128.40 m, moulded beam of 16.50 m and maximum draft of 5.00 m. The deadweight of the vessel is 7,967 DWT and the gross tonnage is 6,309 GRT. The vessel was built in 2012 by Shandong Baibuting Shipbuilding in Rongcheng, China. BBC Bahrain is owned and operated by the German company Briese Schiffahrts GmbH.