Feb 10, Colombo: A series of recently concluded high level meetings between visiting Sri Lanka’s Minister of Industry and Commerce and the ruling monarch of the Kingdom of Bahrain have ushered a fresh renewal of ties between both countries.

Minister of Industry and Commerce Rishad Bathiudeen who visited the Kingdom of Bahrain in early February succeeded in taking the message of Sri Lanka’s transformation to the Bahraini business sector as well as to the ruling monarch Prince Salman bin Hamad Al Khalifa. 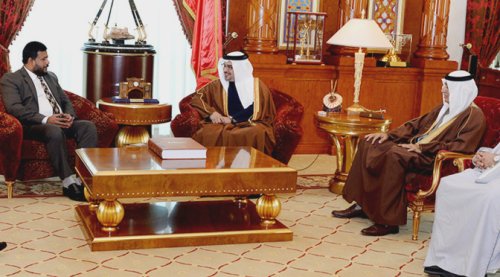 Joining Minister Bathiudeen throughout the tour were Ambassador of Sri Lanka in Bahrain Dr A Saj U Mendis and Minister’s Coordinating Secretary Riyaj Bathiudeen.

During the meeting at Gudabiya Palace with Prince Al Khalifa, Minister Bathiudeen conveyed sincere wishes and greetings from the President and the Prime Minister of Sri Lanka and appreciated the Kingdom of Bahrain for supporting the cause of Sri Lanka at regional and multilateral forums, particularly, at the Human Rights Council in Geneva.

Minister Bathiudeen also expressed gratitude on behalf of the Government of Sri Lanka to the Kingdom of Bahrain and to the Crown Prince for extending well over $ 1 million for construction of 200 houses for displaced persons in the North and East of Sri Lanka.

He further expressed gratitude to the Kingdom of Bahrain for extending a comfortable work environment for Sri Lankan workers, mostly skilled and professionals. Ambassador Dr Mendis enunciated the vitality of the migrant workers for Sri Lanka since they contribute nearly 9% of the GDP, which is higher than the combined contribution of the next three sectors.

The Crown Prince appreciated the call and stated that Sri Lankan workers are much liked by the employers and corporates of Bahrain since they are highly professional, committed, dedicated and competent on their respective disciplines and trades. The Crown Prince also acknowledged that Sri Lanka is well poised to become a rapidly developing nation as well as a hub in the region of South Asia, thus extending services and facilities to the entire region beyond that of South Asia.

During Minister Bathiudeen’s meeting with Minister of Industry, Commerce and Tourism Zayed bin Rashid Alzayani, the Minister discussed a range of issues relating to economic, commercial, touristic, trade and investments, deepening the bilateral relations in the commercial and economic sphere between the two countries.

Minister Bathiudeen outlined and highlighted the highly stable political and economic tapestry of the country after the election of the Administration of President Maithripala Sirisena in January of last year.

He further added that tourism in Sri Lanka would be close to two million this year, given the vast touristic attractions and peaceful environment in the country and expounded of the recent Parliamentary elections of Sri Lanka held in August ’15, in which the UNP was elected adding that the Elections were highly transparent, fair and peaceful compared to that of the previous elections in Sri Lanka.

“Today, Sri Lanka has restored democratic norms and tenets, rule of law, rule of justice, good governance, freedom of speech, freedom of press, and freedom of expression, among others, which were alien to the populace of Sri Lanka during the previous Administration,” Minister said.

Minister Bathiudeen said that the two countries have not yet exploited and have not taken the strategic advantage of the enormous economic, commercial, touristic, outsourcing, and investment opportunities and the natural endowments.

Both the Ministers agreed that the bilateral trade is still hovering around $25 – 30 million range and foreign direct investments and foreign institutional investments are minimal from Bahrain to Sri Lanka and vice-a-versa.

Sri Lanka’s total trade with the island kingdom of Bahrain a trading spot in the historic Silk Route – stood at a nominal $26 million in 2014 while Sri Lanka’s exports were at $19 million and imports were at $7 million. Sri Lanka’s main exports to Bahrain in 2014 were tea, food preparations, spices, tires and other rubber products etc. Main Imports to Sri Lanka were oil, petroleum products, frozen fish, woven fabrics of cotton.

Both Ministers agreed to enhance and to boost the relations with greater and pro-active cooperation, collaboration, facilitation and partnership. Minister Bathiudeen stated that Sri Lanka is ideally positioned for Business Processing and Outsourcing [BPO] and Knowledge Processing and Outsourcing [KPO] sectors and for the corporates and industries of Bahrain to have facilities. This would enable such corporates to have direct and easy access to the large, 1.6 Billion market of Indian sub-continent. The corporates could reduce their cost of production drastically by outsourcing the facilities to Sri Lanka.

Minister Alzayani responded that his country is eager and is keen to engage with Sri Lanka on her economic and commercial trajectory, thus benefiting both sides. He added that the two countries have maintained most cordial and congenial relations not for decades but for centuries, which would enable the corporate captains and leaders of the two countries to exchange ideas and propositions and to seriously consider committing investments and projects in both countries.

Minister Alzayani much appreciated the significance and importance of the meeting and exchange of ideas with Minister Bathiudeen and added that the Kingdom of Bahrain and his Ministry would look into Sri Lanka very favorably given the optimistic and idealistic investment climate of the country.

Minister Bathiudeen accentuated the fact that the current Government’s assertive and aggressive focus of promotion and augmentation of economic and commercial diplomacy.

Minister Bathiudeen also invited both the Crown Prince and the Minister of Industry, Commerce and Tourism to visit Sri Lanka as Special Guests of the Government of Sri Lanka.

Minister Bathiudeen also addressed an Investment Forum organized and coordinated by the Embassy of Sri Lanka, which consisted of over 60 select corporate leaders, business personalities and leading Sri Lankan entrepreneurs, mostly from the Bahrain Asian Traders Committee (BATC) and from the high profile Bahrain Chamber of Commerce of Industry (BCCI).

At the Investment Forum, both Minister Bathiudeen and Ambassador Dr Mendis outlined and delineated the investment and economic scenario of the country and urged, particularly, the corporate leaders of the Chambers of Bahrain to visit Sri Lanka for the forthcoming “Sri Lanka Investment and Business Conclave 2016” scheduled to be held from 8-10 March 2016, among others.

“I am impressed that Bahrain has bilateral trade and economic agreements with over 40 countries, Free Trade Agreements with Singapore and USA, and Duty Free Access with 17 Arab states in the Gulf” said Minister Bathiudeen.

The Embassy of Sri Lankan in Bahrain noted of Minister Bathiudeen’s success in the island kingdom, and said that according to Bahraini media, “The visit of Minister Bathiudeen was highly successful and result-oriented thus widening, deepening and elevating the economic, commercial and investment relations between both countries.”