Outside of Bahrain government supporters, it’s hard to find anyone who thinks the country’s reform process is going okay.

To mark last week’s anniversary of the publication of the Bahrain Independent Commission of Inquiry (BICI), the report ordered by the King of Bahrain into human rights violations in early 2011, the regime evaluated its own progress.  It insists it has made great strides “to complete the legislative framework required to consolidate the rule of the law, protect public freedoms, respect human rights, promote security and stability across the nation, strengthen the democratic march and maintain national unity.” 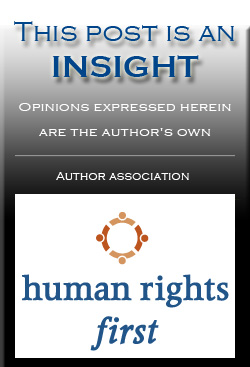 Despite that claim, those of us who have witnessed Bahrain’s police using excessive force and its sham court trials know there is often a chasm between the country’s PR version and reality. That is why  the Kingdom’s response on the BICI anniversary was met with disappointment and frustration – but not surprise – inside and outside the country. The Bahraini government’s claims to be promoting freedom of expression, protecting defendants’ rights and holding to account those responsible for torture is wholly unconvincing to those of us closely following what’s happening there each day.

Human Rights First and other international NGOs knew the government would present a positive gloss on its record, but the irrefutable consensus from the world’s leading human rights organizations is that things have gotten worse in recent months, not better.

Some of the protests have taken on a violent edge, with police and a minority of protestеrs involved in regular clashes. Some protestеrs are throwing gasoline bombs and other missiles at the police. Evidence of police using excessive force, including large amounts of tear gas, continues to be reported. Just in the last few weeks, the Kingdom has banned all public gatherings, sent several people to jail for criticizing the King on Twitter, intensified attacks on civil society figures and stripped 31 Bahrainis of their citizenship.

“No senior official has been prosecuted for the thousands of arrests or held accountable for those who were tortured in custody.” – Brian Dooley, Human Rights First

It’s not just NGOs who are frustrated with the lack of reform in Bahrain. Bahrain has drawn criticism from other governments and international bodies, too. “We are concerned by some of the recent decisions taken by the Bahraini Government, particularly on human rights,” said British Foreign Minister Alistair Burt.  A senior U.S. State Department official observed, “What’s unfortunately happened, on accountability, on the hardest issues, is the government has not followed through. … We see people held in prison, prosecuted for demonstrating a year and a half ago, and there’s still not been meaningful police reform.” The United Nations is dispatching a human rights team to Bahrain to examine the situation next week. 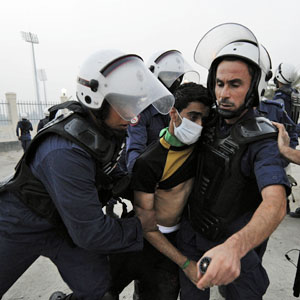 Chief author of the BICI report, international human rights lawyer Cherif Bassiouni, said some progress had been made in the area of security reform, but that things are worse than this time last year. “The numbers speak for themselves,” he said of the government’s failure to hold those responsible for mistreatment or torture. “It doesn’t take a rocket scientist to say that if you have approximately 200 cases and you refer only nine cases to trial in a period of a year and you have one conviction, it doesn’t seem to be a satisfactory result.”

No senior official has been prosecuted for the thousands of arrests or held accountable for those who were tortured in custody. “If you have a sergeant who goes into a cell and tortures somebody and you have a lieutenant who is sitting outside the cell at his desk and pretends he doesn’t hear the screams, that lieutenant should be prosecuted,”  said Bassiouni.

The question has now moved beyond whether the Bahrain government looks likely to implement the BICI recommendations and other human rights reforms in the near future. Now, leaders must ask what to do about the Kingdom’s failure to address its deepening human rights crisis. 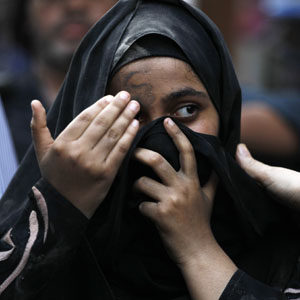 An anti-government protester cleans her face after falling as she tried to run from a sound grenade during a demonstration in Manama, September 21, 2012 (Reuters).

Recent developments should spur a serious reassessment of the U.S.-Bahraini relationship, too.  Until now, the U.S. Navy’s Fifth Fleet, based in Bahrain, has been cited as a reason for the U.S. government’s relatively muted criticism of the regime. But it is time to reverse that thinking. The Obama Administration and Congress should use the leverage afforded by the presence of the Fifth Fleet to press the Bahrain government for reform.

The United States cannot afford an increasingly volatile cycle of protest and violent repression to destabilize Bahrain and the region. Bahrain is perched off the coast of Saudi Arabia in the hypersensitive Strait of Hormuz. Iran closely eyes developments there from the other side of the water. A senior U.S. State Department official said, “We are worried that the [Bahraini] society is moving apart…It is clear that if the society breaks apart, Iran will be the winner and the beneficiary.”

The Bahrain crisis is entering a new phase, and the U.S. government can help shape what happens in the coming months if it takes a more robust approach to the problem.  It should consider recalibrating its relationship with Bahrain, offering more open support for civil society and those pressing for human rights reform inside the country. It should also think about sending a special envoy with resources and authority to press U.S. interests in stability and democracy, as well as condition arms transfers on real reform. In addition, the United States should vigorously implement visa bans and asset freezes on those it considers responsible for the violations, and should publicly call for the release of political prisoners so that necessary political negotiation can begin.

The U.S. government has too many vital strategic interests in the region not to adopt a new strategy, one that helps bring fundamental reform and stability. The United States can’t afford another year of “what might have been.”

This post has been authored exclusively for MEV by Human Rights First.

The views expressed in this Insight are the author’s own and are not endorsed by Middle East Voices or Voice of America. If you’d like to share your opinion on this post, you may use our democratic commenting system below. If you are a Middle East expert or analyst associated with an established academic institution, think tank or non-governmental organization, we invite you to contribute your perspectives on events and issues about or relevant to the region. Please email us through our Contact page with a short proposal for an Insight post or send us a link to an existing post already published on your institutional blog.