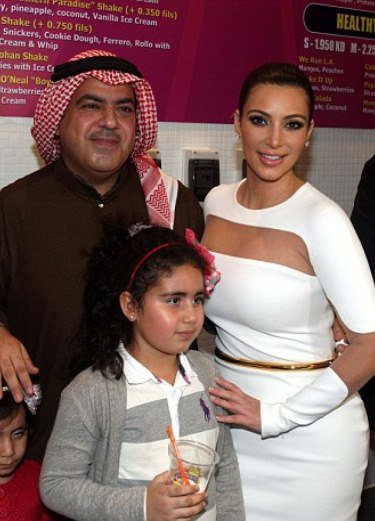 Kim Kardashian’s visit to the Middle East is teaching her at least one lesson about the region, the religiously conservative gulf nations she’s visiting scorn her gaudy lifestyle, hokey marriage and lurid sex tape. Can vice and corruption be far behind?

Kardashian caused an uproar two weeks ago when she tweeted her sentiments about the conflict in Gaza and managed to inflame both Arabs and Jews.

The local newspapers have been all over the controversy. “Her values clash with our traditions as a religiously committed people,” Kuwaiti preacher Mohammad Al Tabtabai, complained to the Gulf News. “Her visit could help spread vice among our youth.”

Conservative lawmakers got into the act in Bahrain, debating whether to launch an effort to ban her from visiting the country because of her “extremely bad reputation.”

Political grandstanding aside–their attempt failed miserably– even liberal elements have a problem with her, if for different reasons. Kuwait Times columnist Sahar Moussa questioned why Kardashian was allowed in the country while other serious artists have been banned, calling it “unacceptable hypocrisy.”

“When it is someone like Kim Kardashian – who is only known for her obscene movie, voluptuous derriere and fake reality TV show that shows nothing but low morals and a lot of plastic surgery – then I have a problem,” he wrote.

“I will not forgive them for letting a person who has nothing except low morals and fake attitude to come to Kuwait and spread what message?”

Wow, only Hollywood is tougher on Kim.

Kim put the best face on her trip. She’s traveling to Kuwait and Bahrain to help launch a chain of milkshake stores. “It’s my first trip to Kuwait, so I can’t wait to see your beautiful city and meet everyone at The Avenues for Millions of Milkshakes on November 29,” she tweeted.

During the Gaza conflict Kim rankled Arabs for tweeting her prayers for Israel. She tried to correct her mistake by also sending prayers to those in “Palestine.” That angered Jews. Neither Israel nor the United States recognize the existence of Palestine.

Check out Kim arriving in Kuwait on the video below and click here to follow TheImproper on Twitter for all the latest updates on Kim Kardashian.