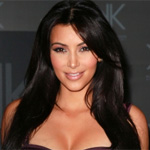 Dubai: Kim Kardashian was welcomed with harsh criticisms, as she arrived in Kuwait at the start of a three-day tour that will also take her to Bahrain.

The 32-year-old reality star will open milkshake stores in both countries and will use the occasion to “educate herself about the Middle East,” a news channel has reported.

Jetting from the US wearing a slimming black trouser suit paired with black-pointed toe stilettos and a black crocodile skin bag, she flashed a peace sign upon arriving on Wednesday in Kuwait where she was later received by US Ambassador Matthew Tueller.

“Just touched down in Kuwait!!! Riding to the hotel now! So excited to be here!” she tweeted to her 16,734,322 followers as soon as she landed. She later tweeted a snap of herself meeting Tueller.

Tweets welcoming her into Kuwait flooded her account, interlaced with remarks that with her looks, she resembled Michael Jackson, and with observations that she should not have made the trip.

The visit, her first to the region, has waded into controversy. In Kuwait, online users were sharply divided over her presence in the country and remarks ranged from warm welcome to flat rejection.

“Her values clash with our traditions as a religiously committed people,” Mohammad Al Tabtabai, a preacher, said.

“Her visit could help spread vice among our youth,” he said.

However, another blogger told the socialite that she has “brightened up Kuwait with her visit.”

In neighbouring Bahrain, conservative lawmakers tried to block her entry into the country, arguing that she had a “bad reputation.”

However, their attempt on Tuesday failed after they could not get the support they needed from their peers and the Speaker ended the session without voting on the proposal.

Several young Bahrainis blasted the move, saying that the conservative forces within the parliament were trying to impose their views on society.

“Lawmakers are supposed to focus their work and time on political and legislative issues, not on who should enter the country,” Sawsan, an office secretary, said.

“If they do not appreciate her, then they should not attend the shop opening ceremony. They cannot dictate on people what they should or should not do,” she said.