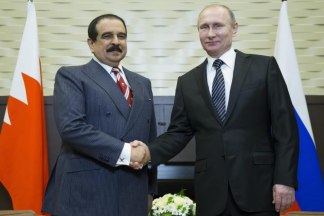 The head of the Bahraini foreign ministry explained that the stances of the two heads of state matched in key aspects, including “the need to fight terrorism, to search for peaceful solutions for existing disagreements, to prevent the collapse of countries and the ouster of legitimate governments.”

“We believe that all major countries must cooperate with Russia in order to restore stability and peace in Syria,” said Al Khalifa.

The minister also explained that “many countries engulfed by conflicts have encountered manifestations of inter-religious and sectarian struggle, which have led to large numbers of refugees and migrants.”

“There are hundreds of thousands of them and this is already a global problem that weakens states,” he said.

Russian warplanes have been since September bombing positions of terrorist groups in Syria and providing air support for the ground offensive launched by the army of the Syrian government.